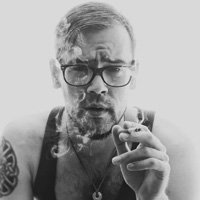 I was born and grew up in Płock. As a child I was inclined to different kind of arts. I used to draw manga, do jewellery from tin, once in a while close myself in a cellar and carve in suporex, write poems and stories. What’s more I helped in the photo club in the local community centre. At the end of primary school, my younger sister decided to take piano lessons. Caring parents bought the Yamaha keyboard. But my sister got bored quickly, and the instrument started to gather dust. Then, completely out of curiosity, I reached for it. After less than a year digging in sounds, combining and sitting for a few hours a day in front of the keyboard, I began to do something akin to playing by „two hands”, and the first commentator of my music was Father. Then came the time for projects, starting from gothic metal, then blues and funk and ending with indie band, where I was lucky enough to play.

In next 20 years, I tried many things, few ways of life. I did several changes of profession. I used to work as a teacher of foreign languages, a designer of tombstones (seriously!), coordinator of international contracts in the refining sector and finally the professional photographer, who I am now. I love my job, but admiration for playing music has never faded out. When I returned from the last industrial contract at the end of 2014 and moved with my Beloved to Warsaw, I focused on the development of my photographer’s work with all strength and creativity. One day the young man with a pleasant and cheerful fizis knocked on our door at Kamienna Street, asking for a corkscrew. From such simple request to start a band, as it turns out, it is not so far away.

I am grateful to the guys, and in particular to Artur, that I can play with them in KA1. Through this initiative, I felt a new energy and a desire to play, I develop myself. This is fun!