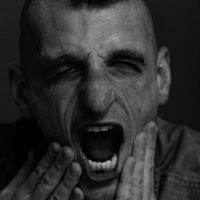 Marek is the most busy man, we know. He goes to bed after midnight, gets up at four in the morning, and despite cloudy eyes, his punk face with a big nose is always smiling. Sometimes maybe it’s better, because too many duties dampens his ADHD. And you need to know that Marek is a master of the local community in different kinds of martial arts. Marek instills warrior’s instinct in the minds and bodies of his sons. Before playing music in KA1 he discharges his energy, warming up with Mariusz Skodowski in punk duet De Hemoroids. Although the word „warming up” might be not proper.

Marek is also a passionate ornithologist, who shares his knowledge with others. He organises ornithological tours, help people touch and … ring birds. Probably Marek will be soon the first and the only one PhD in KA1.
Our friend is one of the most obliging and humble person on earth – KA1.