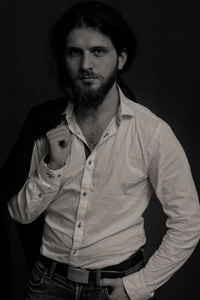 Mariusz K. Skodowski (b. April 5, 1990 in Gdynia), Pomeranian musician, drummer and pianist, son of an unknown bass singer. His first steps in serious music began in 2006. In 2008 he joined the blues band Gilon Gilon, where he worked with great artists like Tom Kruk (Gruff!) and Casper Smolinski (Weezdob Collective). Gilon Gilon won first place in the Anglo-American song contest in Gdynia. After its disbanding, Skodowski organized funky project called Komin Trio and played in prog rock band Proog. The fast-growing career was abruptly interrupted because of moving to Warsaw in 2011. There continued musical break for some time. In 2014 Skodowski met his new neighbour Artur Pruzinski, who soon began gathering people to a new band, from which emerged the current KA1.

Skodowski’s style oscillates around funk–blues, with elements of breakbeat and messy transitions. Skodowski says about himself that he is „a musician, who often likes to change tempo” which, however, comes down to irregular playing on rataplan.